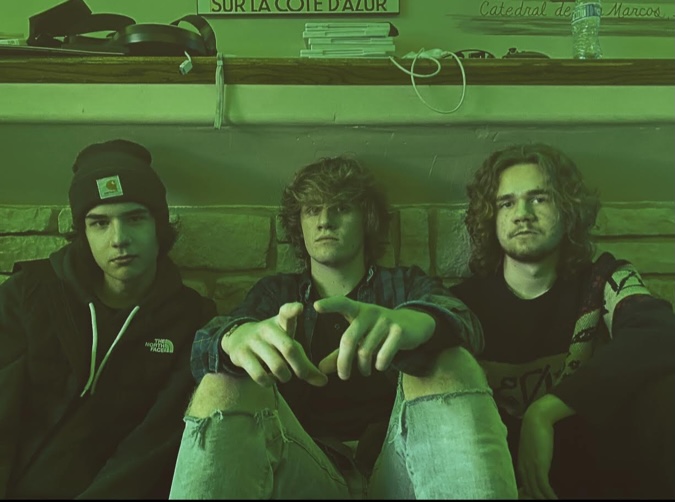 On Jan. 15, Keep the Eleven released their latest single, Amid Flashing Lights.

The band, composed of former and current D303 students, got their name from a happy accident.

“We had some buddies that were in a band and they were doing like a basement punk DIY show, and we went to Portillo’s afterwards, and I asked Reece to get me a drink,” Will Laskey said. When Reece Bittner got to the counter he paid with three dollars and the total was $2.49. Laskey came back and told the cashier to “keep the eleven,” in change.

The next day, Laskey realized that, “it [had] a ring to it, and we’re looking for a band name.”

Including North senior Will Laskey on drums, East senior Adam Caruso on bass guitar, and North graduate Reece Bittner on guitar and vocals, the band formed in 2019 when Laskey met Bittner.
“Me and Reece met through music [enthusiasts] club and… Adam calls us up and says, ‘Do you guys need a bass player?’ We said yes,” said Laskey.

They describe themselves as a rock band with blues influences. The members grew up listening to classic rock.

“My dad played Queen on the radio and I remember he played ‘We Will Rock You’ and ‘We Are The Champions.’ I remember telling him to replay it,” Caruso said.

But it isn’t just rock that they take inspiration from. The band also cites AC/DC, Stevie Wonder, Weezer, The Beatles, and Jimi Hendrix as major influences.

“We were all raised with open minds so that allowed us to get into stuff that not even our dads were into,” Laskey said. But their rock roots stuck with them.

The creative process of drawing inspiration from the past and creating new music is very open.

“There’s not really any set process to how we do it,” Laskey said, “but not one song happens until all three people are 100% on board.” Whether one person could write a song in or outside of a jam session, or each person contributes a section, song writing is always a group effort.

“The only thing set in stone is that the music comes first before the lyrics or vocals,” Caruso said. A song usually starts with a guitar riff and then, “We’ll build a song around that, which is actually kind of an unorthodox thing because people always latch onto the lyrics first, but it’s always been music first for us,” Bittner said.

Once songs are made, Laskey, who used his extra time in quarantine to expand and improve his producing skills, produces the song. Not even a pandemic could stop the band.

When the pandemic started, “we either could sit and wait for COVID, you know, go away, but we kind of thought about it like we just need to take this advantage right now,” Laskey said. “We had unlimited time.”

“I would record a drum track and send it to them and then they would record their stuff in their houses and send it over,” Laskey said. In fact, “it wasn’t until the day we pretty much released them that we all actually sat down and listened to them together.”

“We’d never produced or honestly written any full songs before so that was kind of our first take. So it’s really going up from here,” Laskey said.

Besides being accomplished artists, the band members are also full-time students.

However, he and Caruso both take music classes at school where they are influenced and supported by their teachers.

“I will credit a lot of my effort to Mr. Wis and Mr. Wojo, the two band instructors, because they’ve been kind of mentors over the past couple years,” Laskey said.

“I would say definitely a lot of inspiration just came from school or the struggles that we went through, or the people that we kind of ran into… it’s an emotional roller coaster… we’re always going through different things,” Laskey said.

Their music can be found on Spotify, Apple Music, YouTube, SoundCloud, and Tidal, or through the links on their website: https://keeptheelevenofficial.com/

Note: An earlier version of this story misspelled Reece Bittner’s name. We apologize for the error.